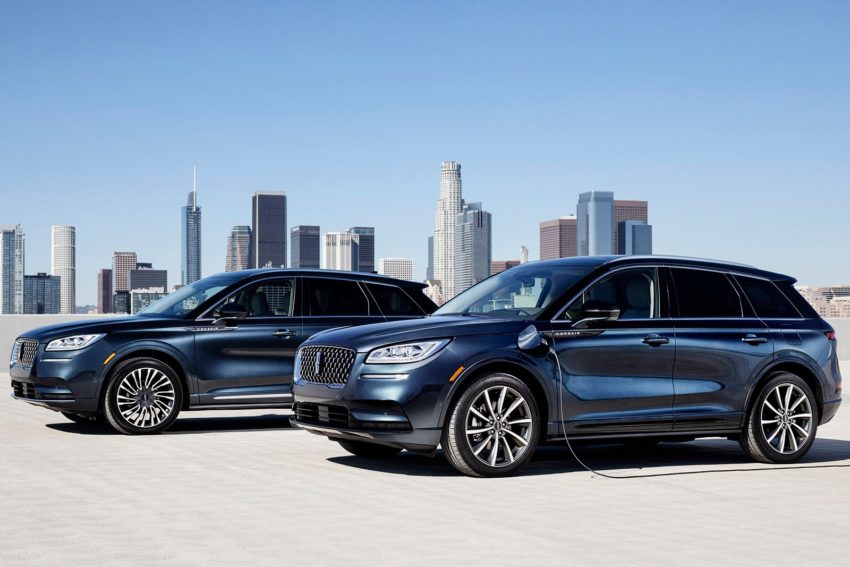 In the luxury compact crossover segment, so this is going to be a direct competitor to the Lexus UX hybrid and, of course, a very direct competitor to something like the Volvo XC60 T8. On the outside this looks very much like the rest of the Corsair lineup and Lincoln tells us that’s exactly how Lincoln customers want their plug-in hybrid vehicle so on the outside, there’s not a whole lot to distinguish this. We don’t have different grilles. We don’t have a lot of different treatment going on versus the regular gasoline versions.

Much like the Lincoln aviator we have a very distinctive Lincoln grill, going on up front and like the in Lincoln aviator plug-in hybrid we have this blue version of the Lincoln logo. There seems to be a little bit confusion as to where the Corsair slots in the luxury landscape.

This is a very direct competitor to something like the BMW X3, the Mercedes Benz GLC, the Volvo XC60, etc. This is not a subcompact luxury crossover, but a compact luxury crossover, so it’s in the same category as the Lexus NX, not the Lexus UX, and the price tag for this plug-in hybrid should be very similar to the competition we’re being told around $ 50,000. When this is available for order in the spring of 2020, unfortunately Lincoln won’t. Let us take a look under the hood, but we do know a lot about what’s going on under here we have a two and a half liter atkinson cycle, four-cylinder engine very similar to what we see in the 40 scape hybrid, but the hybrid system and plug-in Hybrid battery pack are not exactly the same as what we see in the escape lineup.

This system produces 266 horsepower total, which is more than we find in the Ford product line, and we get about 25 miles of electric range from a 14.4 kilowatt-hour lithium-ion battery pack. In the rear overall fuel economy – we’re not too sure about, but we expect this to probably be around 40 miles per gallon. When this launches the Ford Escape Hybrid, gets us 41 miles per gallon in mix driving in front-wheel drive form, and this is going to have a different system. This is gon na, have an electric rear axle in the back very similar.

What we see in Lexus hybrids and Volvo plug-in hybrids, we don’t know the specific of the electric motor in the rear, but we do know it’ll give us at least 110 pound-feet of torque, so most likely at least half of the vehicle’s torque could be sent to The rear at lower speeds at higher speeds – it probably is going to be a little bit under half, but it’s going to give you better traction than what we see in Lexus product portfolio charging happens via this door right here, even though the battery pack is located In the rear and charge times will range from about five hours on 110 volts, so we’re told a low of two hours depending on what kind of 240 volt EVSE you can connect to front seat. Comfort has definitely been a strong suit for the Lincoln brand, whether we’re talking about the Corsair here or the Lincoln Navigator, which is their top of the line SUV. The front seats have been excellently designed in their latest products. Controls are over here on the door and we do have an available lumbar support function there with their multi way power seats.

Now it is worth noting that the plug-in hybrid system cannot be had in the absolute bass trim of the Corsair or the absolute top-end trim. So if you want a Black Label Corsair, then you can’t get the plug-in hybrid system, and if you want the absolute base model, you’ll have to go with a two-liter turbo, even though the Corsair is a little bit smaller than some of the competition on the outside. On the inside rear seat, legroom is definitely pretty generous, also Headroom. I have about an inch of head room left, even though this does have the optional panoramic moonroof.

Remember that when it comes to interior dimensions versus exterior dimensions, it depends greatly on how the vehicle is packaged overall, rear seat quality does seem to be just a little bit below something like the Volvo xc60, but remember that in most forms the Corsair is less expensive. The xc60 can get up to over $ 80,000 if you’re, choosing that top-end plug-in hybrid model moving the rear, we find a little bit less storage space than we find in some options in this segment. But if we lift the cargo area load floor, we find an area where you could actually put a spare tire. Now I realize at the moment we do see a battery under there, but you see that in all Corsair models and most of the Corsair models that have a spare tire, it goes right there just over this 12-volt battery.

So I don’t expect that to be any different in the plug-in hybrid system going for a quick spin around the interior. You can see that large panoramic moonroof that our model has it goes just to over the rear passengers heads we have multi way adjustable headrests height, adjustable shoulder belts, you’ll find those seat controls over there on the front door sore. We find mostly soft touch plastics and an overall style, that’s very similar to the rest of the Lincoln SUV lineup. This model has the optional revel audio and the dashboard has real wood trim running right there across the dash, along with those very large air vents kind of, gives me a little hint of Audi 5000 going on right.

There. We have the same touchscreen infotainment system that we see in the rest of the Lincoln lineup right there on the dash rebel speaker right there in the center on top of that, and then we have a full LCD instrument cluster right over here. This vehicle, of course, is a pre-production model and it’s been turned on and off, and the battery’s been disconnected repeatedly, there’s also stuff right in front of the vehicle. That’s why we have that alert there, but the overall instrument cluster display should be very similar to what we see in the rest of the Lincoln lineup.

We have a three spoke Lincoln steering wheel with a split bottom spoke right. There paddle shifters on the back of the steering wheel, which i think is kind of an interesting touch for a plug-in hybrid model that doesn’t have a stepped automatic and then on the steering wheel. We have a combination of joystick style buttons on each side, as well as physical press buttons. Moving back to the center console, we find the controls for the dual zone: automatic climate control, the toggle switches for the transmission mode right there park reverse neutral drive.

We have a storage cubby right down there at the bottom that we can open to reveal a decently sized storage area there USB ports right there at the back two large cupholders over here drive mode selector as well. A really handy touch that I noticed in here is that, right here in the center of the dash, we have three very easy access buttons, one for the 360-degree camera system, which is something that I really appreciate. We also have a button for the driver assistance settings. We can click it again to get the additional driver, assistance settings like lane-keeping, pre-collision, etc, and then we have button for the autonomous parking system, which does work really well in modern, Lincoln and Ford products.

There’s also available heads-up display, which is a little bit difficult to see right there in the windshield, but it is one of the variety that is projected on the dashboard again in a really nice touch for this segment. At this point in time, we don’t have an official on sale date, but we’re told to expect this to happen around the summer of the calendar year 2020. You should be able to get orders in some time around spring of 2020. This should be priced around $ 50,000 or so a little bit less than a Volvo xc60 plug-in hybrid, but we do get less power out of this plug-in hybrid system in terms of overall theory of operation.

It’s very similar to what we see under the hood of the Volvo, with one big exception. This uses a planetary, gearset style, hybrid system, rather than the 8-speed automatic that we see in the Volvo now it is worth noting that for about 4 grand more, if this sticks right around $ 50,000, you will get 400 horsepower in the Volvo. Although the fuel economy is likely going to be lower, fuel economy in this should be pretty similar to what we see in the Lexus NX hybrid, but we’re gon na get a lot more power. The Lexus NX is just over 180 horsepower.