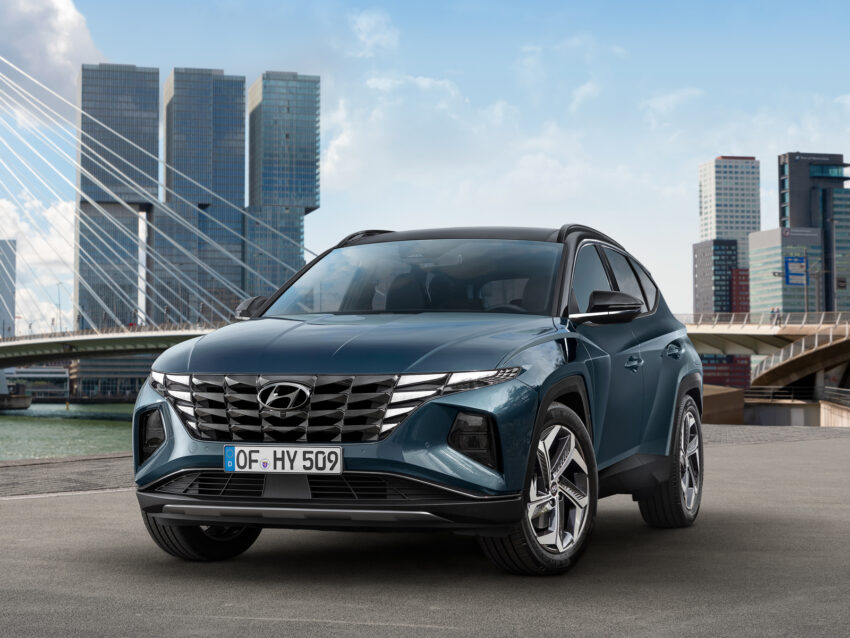 Hyundai just announced that the best-selling vehicle in their lineup, the hyundai tucson, is getting a complete redesign for 2022., now full disclosure.

There is a ton that we know about the tucson, but also quite a bit that we do not know, especially when it relates to the north american market. So hyundai today has released a lot of details and three pictures of the new 2022 tucson, but this at the moment is going to be the south korean market tucson. Now most likely, the european version is going to be pretty similar, but it is possible that the version slated for north america and possibly china might be a little bit different. That’s because this generation of hyundai tucson is going to come in two different lengths.

That’s the first time the tucson has had a short and a long version, most likely. The short version is going to be targeted at their home market of south korea and also europe and most likely. But again we do not know for sure the longer version might come to the united states. Obviously, the first thing you’re going to notice is this very expressive front end.

The design looks somewhat similar to the rest of the hyundai lineup that we’ve seen in america. I do see a little bit of hyundai palisade in here, but the design elements of this grille extend into the headlamp modules and the accent lights up front. I really like the look of this design, i’m kind of intrigued to see what it looks like in person. It helps break up what would otherwise be an absolutely enormous, grill design with some illuminated elements that will definitely look pretty unique.

One thing you can certainly say is that this is not going to be a boring. Looking crossover, i’m actually a little surprised that hyundai is being so aggressive with the design, since the tucson is their best selling vehicle in the world, and normally manufacturers tend to be a little bit conservative with their best-selling vehicle redesigns. The really angular design language continues along the side, and you can certainly see inspiration drawn from the recent launch of the hyundai elantra and some of hyundai’s other more recent products. This definitely is a bit of a departure from the hyundai sonata.

Now the sonata came out a little bit ago, then we had the elantra, which definitely was going in a more angular direction, and now we have this tucson, which is taking the baton and going even further. Unfortunately, hyundai sent out only three pictures of the tucson, so we don’t have a full-on rear shot. However, you can guess at what that looks like based on this three-quarter view. You can see that the tail lamp modules have a lot of similar elements to the front modules and, of course, the front grille, and then that angular design, theme and sort of knurled knob appearance.

I guess, for lack of a better term continues at the bottom of the bumper. This really does look to be a more expressive vehicle than the tucson before, which was always a little bit on the anonymous side. Hyundai’s recent dedication to interior refinement is really obvious. When you look inside again, we only have one picture of the interior here, but you can see that this particular model has the optional.

Just over 10 inch infotainment screen an eight inch screen is going to be standard, and then we have a full lcd instrument cluster. In all likelihood, the lcd instrument cluster is going to be optional by the time the tucson makes it to the us. But again we don’t have any details about that. It does look, however, that it really was definitely designed to have this full lcd to begin with, because it makes the dashboard look really interesting and symmetrical.

There’s no hood over that lcd cluster diving into the press, release that they just sent out again we’re going to have a short and a long wheelbase version, most likely only one of those variants is going to come to the united states, and it wouldn’t surprise me If it’s the longer version so that we could compete a little bit more directly with something like the honda crv and perhaps the nissan rogue in the united states, remember that hyundai has a wide variety of crossovers on sale in the us. They have the palisade on the large end. They have the santa fe, which is a murano and ford edge competitor. Then they have the tucson.

They also have the kona, which is a sub compact crossover and then the hyundai venue, which is an even compactor subcompact crossover. So i wouldn’t be surprised if we got the long wheelbase version of the tucson, but it wasn’t really that much longer than the current version. It may end up being sort of like honda crv sized, because if they made it even bigger, it might step on the toes of the santa fe. The one specification hyundai has given us is the cargo capacity which, at 38.7 cubic feet, is pretty large for a compact crossover.

So this is definitely going to be competing with those larger entries that we find right now, like the honda crv, the rav4 and the nissan rogue. When it comes to cargo practicality, we also know what’s going to go on under the hood, at least for some of the models there’s going to be a base two and a half liter four-cylinder engine. This is one of hyundai’s latest engines. It’s gon na be mated to a standard, eight-speed automatic transmission, and it’s gon na give us 190 horsepower and 182 pound-feet of torque there’s also going to be a 1.6 liter turbocharged engine paired to a hybrid system or a plug-in hybrid system, depending on where you live.

In the world at this point in time, we don’t expect hyundai to bring the plug-in hybrid to the united states. It appears that hyundai plans on saving all of their ev tax credits for full evs, rather than using some of them on plug-in hybrids like the tucson plug-in. But if you live in europe or china, or some of the other markets out there, you will likely get the plug-in hybrid as well. That hybrid system is gon na, be based around a 1.6 liter turbocharged engine.

To give us 180 horsepower from the engine and the electric motor is going to combine with that. To give us 230 horsepower total, according to the specs, that they’ve released torque from the engine comes in at 195 pound-feet of torque. So this is basically the same 1.6 liter turbo that we find in the sonata and then combined torque out of the hybrid system is 258. at the moment.

Out of a new vehicle, it’s going to be available with all of hyundai’s latest active driving assistance technologies, including radar adaptive cruise control, lane keeping assistance all that sort of thing. It’s also going to get hyundai’s latest highway driving assist feature which is more aggressive, lane centering and it looks like it’s going to get their remote smart parking assist feature as well. Now, there’s a whole section here on the digital experience in the vehicle, but again not too many details for the north american market. We know that it’s going to have the hyundai digital key functionality, which will allow you to use nfc keys or an nfc compatible smartphone to get into unlock the vehicle and start it.

Of course, we’re going to have the optional 10.25 inch navigation system and what looks like a standard 8 inch touchscreen in the base model, with apple carplay and android auto both of those will be wireless on the 8 inch display on the audio system front. We know that the tucson is going to be getting a bose premium, audio system, which continues to be a bit of a departure from previous harman kardon branded systems in other hyundai and kia vehicles, and it’s going to be getting hyundai’s latest indirect and direct ventilation system. They made a big deal out of that a few months ago. We didn’t know what vehicle that was going to go in.

It looks like the tucson is going to be getting it. Basically, you can choose whether you want air to be coming out of the vents that are facing right at the driver and front passenger or other vents located elsewhere in the vehicle, to give you more of a diffuse airflow, pretty similar to what we see in modern Mercedes models and lastly, hyundai says that there is going to be an n-line version of the tucson, but we don’t know any of the details about the tucson end line just yet, although there are a lot of rumors out there, so now we’re going to dive into Rumor land and the rumor mill is telling me that it’s probably going to be a eight-speed dual clutch transmission with all-wheel drive it’s possible that it could be an 8-speed automatic instead of the dual clutch that we find in the sonata end line. But it probably will be getting the same engine that we find in the sonata end line, so nearly 300 horsepower, probably not actually 300 horsepower heap loads of torque out of a two and a half liter turbocharged engine. This is the same two and a half liter turbo that we find spreading quite across the hyundai lineup and, of course, the genesis lineup as well.

No performance figures are available just yet, but logically, you should expect it to be faster than the mazda cx-5 signature with its two and a half liter turbocharged engine. This engine appears to be producing more power than we find in that model, and it’s gon na have an eight-speed automatic or an eight-speed dual-clutch transmission either of those is going to have more aggressive, starting ratios and, of course, higher final ratios. To give you better fuel economy and likely better performance as well, unlike some of the other new segments we’ve been doing lately, we know when this is going to go on sale and it’s pretty soon. If you’re in south korea you’ll be able to get your hands on one in september of the 2020 calendar year, so right about now actually and if you’re in the united states, you have to wait until the first half of 2021 somewhere in that nebulous region.

The 2022 model year vehicle will emerge so for 2021. The tucson is either not going to have a model year or it’s going to be unchanged. 2022. We’re going to get this all new model and likely we’ll start seeing some more details, dribble out, probably in about a month, or so, maybe by November or December of the 2020 calendar year.