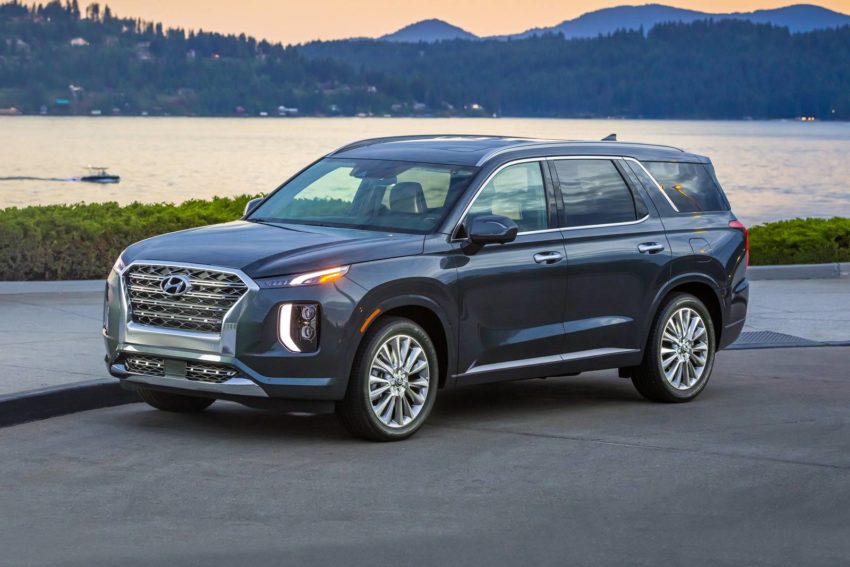 If you’ve been wondering what hyundai had up their sleeves for 3-row crossover, shoppers then wonder no longer, because here at the 2018 LA Auto Show that pulled the covers off of the all-new hyundai palisade.

This will replace the three row santa fe in their lineup. The overall look is definitely distinctive. We have a grille that is reminiscent of the recently refreshed, Hyundai, Sonata and, of course, the Kona and the Santa Fe itself, but it’s bigger and bolder in the palisade. This one has a sort of soft chrome theme going on near parking, sensors up front radar cruise control sensor, because this has all of Hyundai’s latest active safety systems, absolutely standard and building upon what we see from toda and Honda.

This vehicle has all of those same systems, but it adds blind spot monitoring, which is typically optional in those other competitors. We have headlamps that are divorced from the daytime running lamps. That you’ll find up top turn. Signals are also up there as well.

This is something that we have also seen in the Kona and the new Santa Fe in terms of overall length. This generation is a little bit longer than the Santa Fe that it replaces it’s now about the same length overall as the Subaru ascent. It’s still definitely styled like a 3-row crossover and it actually has a style back here that is reminiscent of a more body-on-frame style SUV than the average soft rotor in America, especially when you look back here at this rear window line in the chrome going on here. I see a little bit of Lincoln Navigator.

Definitely some large GM SUV. Overall, I think it’s a very attractive look, especially when we go round to the back. This dark red color makes it a little bit difficult to film the rear in this lining, but we have a very concept car, looking back, in which I really love. We have a very vertical rear hatch, which helps improve cargo practicality and, of course, third row room, and these very interestingly and intricately designed tail lamp modules.

They have some little ribs in there they’re LED modules in there. It’s actually a 3d element to them as well. Hyundai is no stranger to 3.8 liter engines, so we find one under this hood, but it’s not the same old 3.8. This is actually a new engine that now runs on the atkinson cycle.

It does that in order to help improve efficiency, but power is also up over the 3.3 liter v6 that we found in their last three row, crossover 291 horsepower in this engine and a little bit more torque as well. More importantly, this is now made it to their new 8-speed automatic transmission that we’ve seen in some of their other vehicles that sends power to either the front wheels or to the all four wheels via an op, no all-wheel-drive system. We don’t know exactly what fuel economy numbers will be like at this moment, but expect this to not only be better accelerating than the last model, but also have better fuel economy as well. The overall interior design is probably the biggest departure between this and the outgoing Santa Fe C that we have much more premium appearances and much more premium materials being used in this cabin.

That open pour looking trim moves on over from the door on over to the dashboard in kind of a new departure for the brand, where we have kind of a two-tier dashboard design. Instead of an infotainment system tacked onto the dashboard sort of like we see in the Kona, we have something that’s a little bit more integrated with the instrument cluster binnacle over there on the Left controls for the infotainment system to zone climate control down there we have The latest Hyundai shifter very similar what we saw in the ionic with push buttons for Park, reverse neutral Drive, etc. We have a knob over here for the all-wheel-drive system that allows you to change the driving mode based on your terrain, buttons for the heated and ventilated seats right there, pretty big storage, cubbies right here in the center console. It’s one with the charging mat two cupholders there, then we have some storage right there or the armrest.

The instrument cluster appears to be a pretty typical, Hyundai design very similar to some of their other vehicles, but we have what appears to be a new steering wheel outside of that. It’s attractive leather wrap model in this particular vehicle and slightly different, but similarly themed buttons over here. The overall interior design and interior quality is definitely a step above the last model. In fact, this actually looks an awful lot more like a Lexus competitor.

To be honest and something like a competitor to the Ford Explorer, it’s really obvious. When you take a look at the door panels on this upper and trim, we have a lot of quilting going on right there on the doors that you typically don’t find in this segment. We have integrated sun shades there on the top. Then, of course, back in the ivory model.

We really have a very elegant overall color palette. Behind the third row seats. We definitely find more cargo area than the average 3-row crossover there’s even a little bit of storage. Right there, under that cargo area load floor, the rear seats appear to be pretty easy to fold flat.

We have buttons over here to power flip and fold the third row, that is quite a nice touch, and then we have one touch releases for the second row seats as well. If you want to know more about the palisade be sure and stay tuned, because we will be getting our hands on one just as soon as possible for our complete reviews. But until then it’s easy to say this is likely going to be a winner for Hyundai, because it’s big it looks great. The interior especially, is definitely a step for the outgoing model, and I really love the blue on ivory interior that this particular model has.

I hope that definitely makes it to more trim levels over time. It’s worth noting that, although the overall size is definitely about the size of the ascent, this appears to be a little bit more practical on the inside because of its overall square and more upright profile. We definitely have more cargo area in the back than we find in the average three or a crossover, but again stay tuned for that full review when we can get our hands on one for a week.